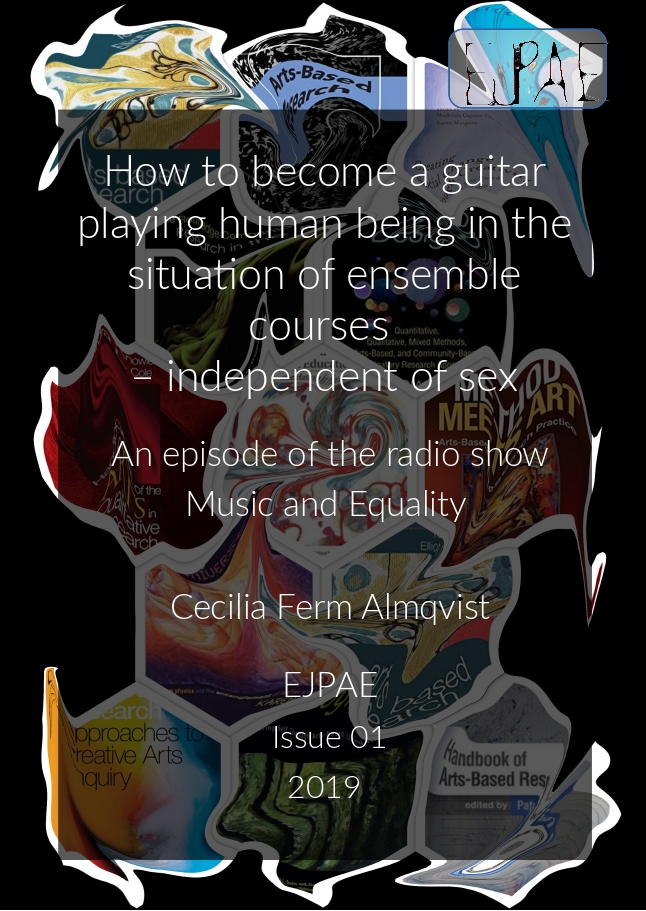 The article will shed light on both the challenges to and possibilities for growth as an ensemble guitarist within upper secondary popular music ensemble courses in Sweden. The paper is a critique of an un-reflected view of popular music as a preferred situation for musical learning in schools. It is intended both as a thought-provoking speech directed to ensemble teachers aiming for equal music education, and as a philosophical exploration of female experiences of ensemble education. The article is based on an existential–philosophical way of thinking, mainly in line with the thoughts of Simone de Beauvoir, both when it comes to the view of human beings independent of sex1 and as a base for how to communicate scientific results in a sensitive situated way. Hence, the format of the article, drawing on Arts-based research philosophy, is constituted as an imagined radio show episode, including a programme leader (PL), two young female guitarists – Anna and Lucy – and one prominent philosopher: Simone de Beauvoir (SdB). The article consists of text as well as a sounding dialogue and drawings. The dialogue is based on interview material combined with studies of primary and secondary Beauvoir literature. Issues that will be explored in the conversation have emerged in an earlier study of the story of one female guitarist: an upper secondary student at a specialist music programme. Issues chosen for the current article shown to be crucial from an equality perspective are; Transcending boys and immersing girls, the male gaze, relations to patriarchal repertoire, possible projects and the role of the teacher.

1 Sex is in line with de Beauvoir defined as the physical difference between males and females. Gender is something human beings become, and in this article the ambition is to start where humans are seen as equal beings, independent of physical prerequisites.

PhD Cecilia Ferm Almqvist is a professor of music education, and professor in education at Södertörn University. She graduated in 2004 on a phenomenological thesis about teaching and learning interaction in music classrooms. Her philosophical and empirical research focuses upon democracy and inclusion in diverse music educational settings, and special educational contexts. She has presented her work internationally at several music educational and educational conferences and in well-known scientific journals such as RSME, PMER, BJME, IJME, VRME, and Reconstruction.