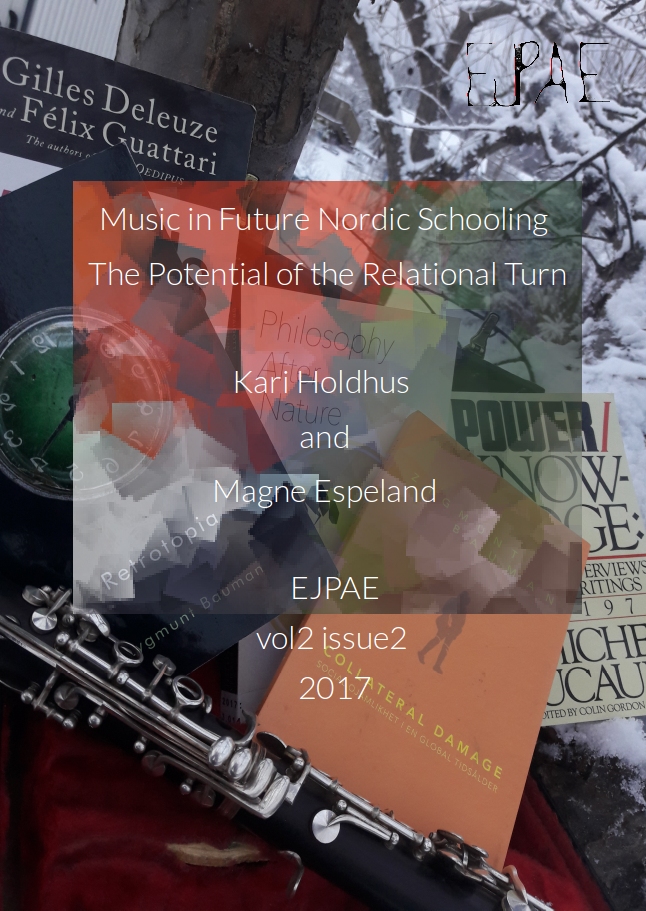 In this article, we discuss general school music in light of the fairly recent focus on rela­tionality, specifically in pedagogy but also in related academic fields, such as psychology, aesthetics and philosophy. The main focus of the text is directed towards what we refer to as the relational turn in education, emphasizing school music in Nordic and Western countries.

The article is inspired by two recent Norwegian reports indirectly suggesting that the accountability and cognitive skill-oriented school policies within the Norwegian education community that have dominated for the past 20 years might be inadequate. The reports propose a new direction focusing more on creativity and inclusivity with an emphasis on deep learning and the social and emotional impact of education.

By investigating the relational turn in education as well as relationality in the fields of philosophy, psychology and aesthetics, we argue that many of these relational approaches may contribute to renewal of the rationale, as well as the construction and practice, of school music as a future curriculum subject.

In the last part of the article, we discuss how three internationally known disciplines of school music, namely music-making (singing and playing), composing and listening, could be renewed by pedagogies inspired by the relational turn.

Holdhus is currently project-leader of an innovation project on Norwegian professional visiting concerts, called School and concert – from transmission to dialogue. The project is founded by the Norwegian Research Council (see www.casecenter.no).

Her research interests are centred around communication processes between musicians, teachers and pupils in visiting music practices and musical partnerships. She also researches the connections between quality conceptions, ethics and relativism in music education, especially addressing higher music education and community music education. She also is a member of the Bergen-based international research group Culture, criticism and community.

Magne Espeland is professor in Music and Education at Western Norway University of Applied Sciences (WNUAS), Campus Rommetveit. in Norway. Specialities are curriculum development and innovation in music and arts education.

Nationally, Espeland has chaired and served on a number of Ministerial Committees from 1994 onwards, e.g. on new national curricula in music (1997) and music teacher education (2010).

His current research activities include being principal researcher in the projects Building Sustainable Digital Practices in Kindergarten Literacy and Arts Programmes (DigiSUS), as well as the innovation project School and concert – from transmission to dialogue (DiSko). Both projects are funded by The Norwegian Research Council.